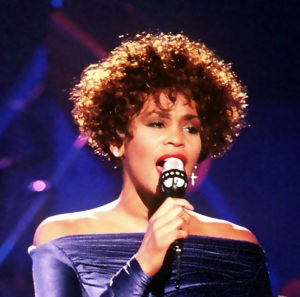 I first worked with and met the amazing Whitney Houston in rehearsals for the Arsenio Hall Show. It was LA in the fall of 1990. She had just released her ‘Im your baby tonight’ album and we were preparing for her very first TV performance. The eve of that first rehearsal, I excitedly drove from West Hollywood to the valley and parked at the studio where we would be working. This was it! I was about to meet a legend.

I had auditioned for this job two weeks prior. Auditions were held by the amazing and talented Diesko Boyland Jr., and he was wonderful during that process. Funny, easy going and he just made you feel completely comfortable. (Whitney and Diesko made up this African gibberish language together that was hysterical! They would go back and forth usually before starting rehearsal and we would all bust out laughing! She could be so silly and fun too!)

I was of course beyond the moon getting the call saying I had booked this job and was going to have the opportunity to work with Whitney! I was just starting my LA career then and I had danced and performed with a few celebrities before: Prince, Gregory Hines, Paula Abdul, Debbie Gibson. (‘Electric Youth’ was my first video job ever!) This opportunity felt like I had won the lottery! I was going to dance with Whitney Houston! I was a huge fan of hers since she first came onto the music scene, and I owned her two previous albums already. I listened to them just about every day and I was just in awe of her.

Read the rest of Christopher’s post at Lipstick Alley